Troutdale is a heavily used truck stop. There are trucks and truckers everywhere. Seemed a no- brainer to do a series. I used to wait tables in college at a diner frequented by truckers. From that experience I knew that while they can be gruff sometimes (I know I would be cranky after 14 days of driving), they are typically good people; they’ve got plenty of hilarious stories and more importantly (at that time at least) across the board they were the best tippers. All things being equal, I’d pick the trucker tables over the business lunch crowd any day. Regardless, the idea of hanging out at a truck stop talking truckers into letting me take a photo to do a painting off of was a little intimidating. Actually, to be honest, the idea scared the hell out of me.

I talked to my friend Cliff who tried to help me analyze exactly what I was afraid of. When that didn’t work, he resorted to calling me a chicken and all sorts of other juvenile names. I’m ashamed to admit that’s what worked. I’ve spent the last few mornings at the truck stop catching the truckers after they filled up and were going inside to pay or grab a Coke.

Some I only talk to for a few minutes, others I talked to for up to 45 minutes. I met truckers from all over the U.S. and even ones from Rio, London, and India. Richard Montgomery (“Like Montgomery, Alabama… but I’m from OMAHA!”) just turned 50 but maybe looks 40. We talked about everything from Paris Hilton to Condoleeza Rice, of course that led to Iraq, then Syria…somehow ended up talking about Orwell’s “1984”, the collapse of the bridge in Minneapolis…he did a hilarious impression of an American talking to an Iraqi (he wants to be a comedian some day). My guess is this guy spends most of his time driving listening to news and talk shows. He’s very well informed and a lot smarter than he thinks. The one and only female driver I saw was from Wisconsin and was very excited about getting her photo taken for a painting. Tarry’s been driving for 11 years and LOVES her job. She’s an evangelist spreading the Word and she’s got more energy than she seems to know what to do with. A very funny lady. There were many many good stories. This is going to be a fun series.

Here are a few pieces in various states of finish. The woman by the way is an attendant at the station, not Tarry. 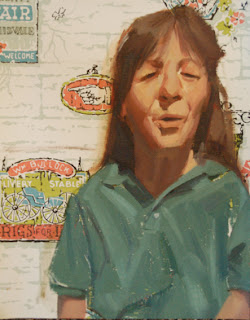 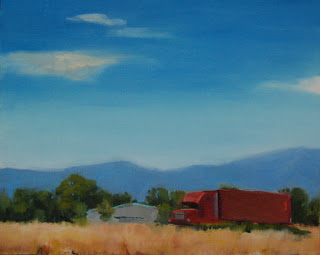