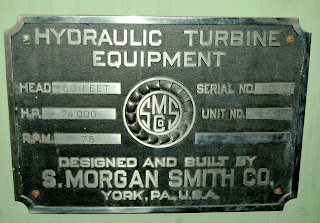 The studio I’m working in is next door to the Army Corps of Engineers. Last week, Gary (from the Corps) took me on a tour of the Bonneville Dam. Actually he took almost the entire day to show me the dam and parts of the Columbia Gorge (Thank you, Thank you, Thank you!!). As an added fashion bonus, I even got to wear an Army Corps of Engineers hard hat! Didn’t get a picture of that, so you’ll just have to imagine it.

They’re refurbishing some of the generators so they had giant parts laying about and massive holes where the stuff was supposed to go. OK, that’s an incredibly simplified version of what they were actually doing but it was pretty cool.

I’m only semi-mechanically inclined. By that I mean I can take things apart and put them back together without any “extra” parts at the end, but I rarely know how the thing works. I'm a good puzzle solver. My sister and I changed the carburetor on my bug when I was in high school– impressing both my brother and my mechanic–but I have only the vaguest idea what a carburetor does.

At any rate, I got the grand tour, was walked around the facilities and shown the giant rotors and turbines and the gaping hole where it all comes together. I can look at the parts and envision how they all fit together but after that…. Um…The part with the blades sits in the Columbia River, the water turns the blades and presto-magic, Oregon, Washington, and parts of California have electricity! There’s my high-tech explanation which will surely leave Gary on the floor laughing (I have a feeling I just failed the test….) 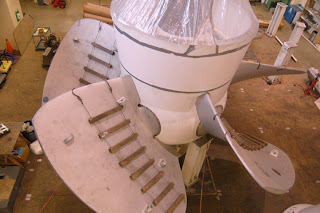 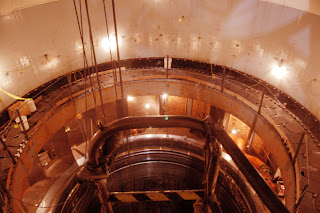 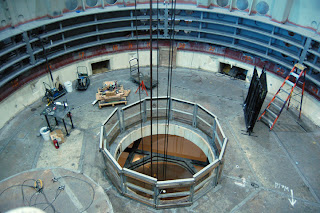 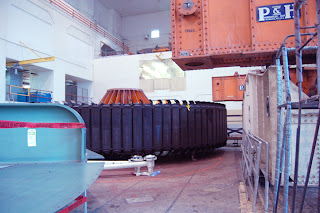 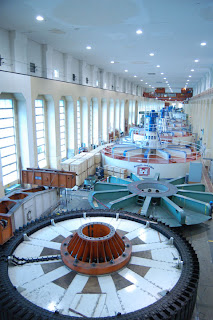 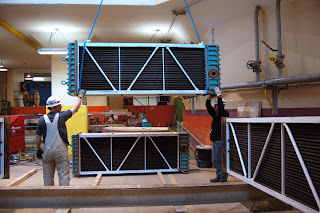 This is a one man elevator with barely enough room to turn around. These guys are extremely safety conscious; you have to sign in everytime you use it because it goes down into a confined space. Of course, this guy dutifully filled out the form. If he hadn’t, he would have been mortified to see someone at the top taking photos. If he hadnt followed protocol, his buddies just might have convinced him the woman with the camera was from Safety Engineering… at which point all color would have drained from his face. 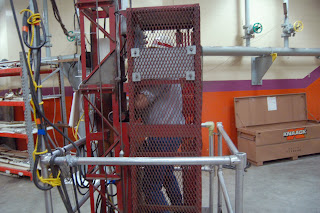 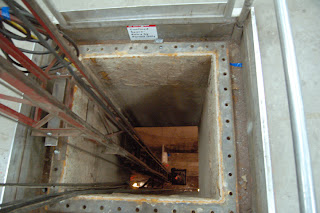 Speaking of the shaft, some guy has to crawl through this tiny door and weld all day. That's Gary pointing to give size perspective: 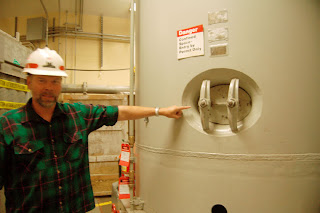 Part of the Homeland Security Act resulted in lots of fancy new equipment for the dam. I got to go up and take pictures of it all but I have a feeling I shouldn’t post them. All you really need to know is this: If you are out hiking within a few miles (yes, miles) of a facility deemed worthy of Homeland Security funding, and say you think you’re in a private place where you can duck behind a bush to pee…its not probable but it is possible that someone is watching… and laughing.

Afterwards we went to a fishery where I was completely repulsed and fascinated by these suckers: 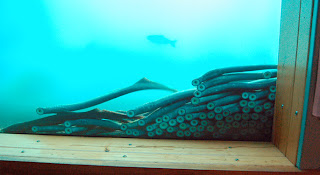 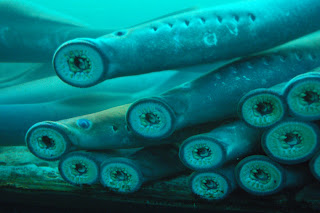