The other day I took Oxford (Ken’s dog) for a walk down the street that runs on the back side of the studio. I had been completely engrossed in a painting so I was in that state of mind where I’m hyper aware of anything painting related but oblivious to all else. I may notice things but if they aren’t related to the painting, it just doesn’t click.

Because I’m working on the trucker series, I immediately noticed the way the roads intersected across the field bordering the complex; that the afternoon light would be hitting it soon and that there were a lot of trucks moving along the road and onto the I-84 onramp. With my zoom lens I’d be able to get some good shots. The sun was behind me, so I kept turning around to see where it hit the trees and figuring how long before it was likely to make the trucks coming down the road look extra cool. I noticed, but immediately dismissed, the large parking lot on the opposite side of the road, the remaining warehouse buildings… and the group of guys (all dressed in orange shirts) sitting in the shade of the building clearly waiting for something.

I let Oxford run around in the field for a while and then went back to the studio for my camera. I’m getting great shots of trucks coming on and off the freeway with the field in between. I’m still looking behind me to see where the sun is hitting and where its likely to go. The guys in the orange shirts are now watching my every move. It vaguely occurs to me that they might be thinking I keep looking in that direction because I’m looking at them but I’m so focused on the trucks that the thought barely makes a blip. 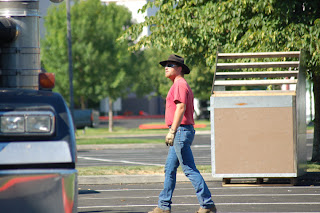 A truck pulls into that parking lot and the guys jump up and start loading. The light is now that perfect golden light just before sunset. The driver’s got one of those Australian leather cowboyish hats and its too much for me to resist so I start taking photos of them. The guys notice and really start hamming it up. I think, wow, these guys don’t’ get out much…. 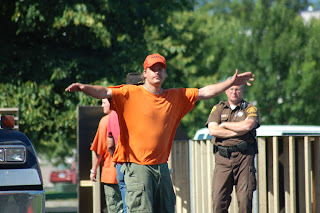 I’m far away but my lens is really good so I’m zooming in and getting some great shots. The security guard (or so I thought) starts walking over to me. As he gets closer, I realize it’s a sheriff. This doesn’t particularly surprise or alarm me because in LA with the movie industry and all, its fairly common for a cop to be around big trucks as they’re loaded up with props and such. He starts chatting with me and makes a joke about my disruptive presence. I ask if its ok that I’m taking photos, and he says the guys don’t seem to mind. We chit chat as I’m snapping away, the guys are still loading but clowning around for the camera. I’m zoomed in but looking at composition, the light, etc but ignoring small details. Like what is printed on their shirts and caps. I zoom in even closer and FINALLY it registers: printed on each and every one of their shirts: Marion County Sheriff’s Inmate Work Crew.

I’m nothing if not observant… and I was right, they don’t get out much. 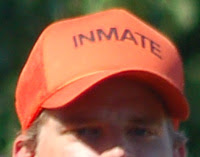 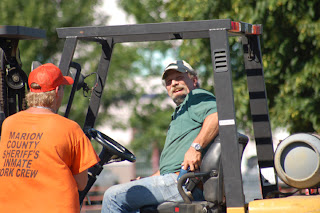