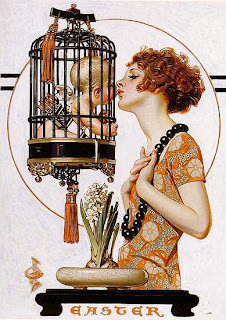 Drop what you are doing and go see this!!

A traveling exhibition of 50 J.C. Leyendecker pieces is on display at the Fullerton Museum Center! The exhibition originated at Stockton's Haggin Museum last year. I was in the Bay Area for a friend's wedding and was fortunately able to convince my friend Dan to drive me all the way out to Stockton to see it. It may have been out of curiosity after hearing me rant and rave over the years about Leyendecker or it may have been self preservation (knowing that I would have begged, pleaded, poked and prodded or otherwise made myself enough of a nuisance so that it was just easier just to go to Stockton) but he drove me out there on New Years Eve day to see the work of one of my heroes on the very last day of the show (for which I will be forever grateful!). It was the first time Id seen his work in person and it is, of course, 1,000 times better than print.

One of my most cherished possessions is an out of print book of his work (J.C. Leyendecker by Michael Schau). I first saw Leyendecker's work in college. An instructor brought in a black and white xeroxed copy of the book. He offered to divvy up the xerox to any students who wanted it. No one came forward so I asked, and he gave me the whole notebook. It took me 10 years to find a copy of the real thing–in COLOR (thank god for Al Gore and his invention of the internet…).

Leyendecker preceded Norman Rockwell as illustrator for the Saturday Evening Post. He was an intensely private person so records of his personal life are virtually non-existent. Best known for his Saturday Evening Post covers, Leyendecker also created the “Arrow Collar Man” for Cluett, Peabody advertising. To give you an idea of how incredibly popular he and his illustrations were, in a single month during the early 1920's the firm received 17,000 fan letters that included marriage proposals for the “Arrow Collar Man”. Think about it: a fictitious character received more fan mail than Rudolph Valentino
(this is according to Schau).

Legend has it that a young Rockwell would wait outside the station just to see Leyendecker get off the train. As an homage to Leyendecker (again, according to “legend”– Rockwell fans dispute this), Rockwell stopped one short of Leyendecker's 322 covers.

For each cover, Leyendecker was paid somewhere between $1,500 and $2,000. I'm not sure what that translates to in today’s dollars but for the early 1900's he was extremely well paid. According to my history of Illustration instructor (I only remember this because I thought it was so funny), Leyendecker believed he should spend more than he made: being hungry is good– it keeps you from being lazy. By the time he died in the 50s, he was broke and all his fans had forgotten him (ouch!). His work was auctioned off, given away or otherwise disbursed to the winds.

Which is why, I think, he is so criminally unrecognized as one of the most phenomenal draughtsman/illustrator/ artists of the 20th century. And why its so incredible to see a collection of his work. So incredible that you should drop what you are doing and go see this show.